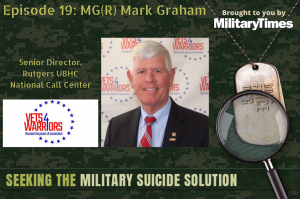 Major General (retired) Mark Graham is currently serving as the Senior Director, Rutgers UBHC National Call Center. Included in his duties is Director, Vets4Warriors and several other programs. MG Graham retired from the US Army on August 1, 2012 after almost thirty-five years of service. His final position was as the Director (G-3/5/7) U.S. Army Forces Command, Fort Bragg, North Carolina. In this position, he oversaw the plans, operations and training for Army forces (active and reserve component) stationed in the Continental United States and ensured conventional forces were prepared for worldwide deployment and combat.

MG Graham and his wife, Carol, are tireless champions of military and civilian efforts to promote mental health and suicide-prevention awareness, and to eliminate the stigma surrounding mental health care. To honor the memory of their sons, 2LT Jeff Graham who was killed by an IED in Iraq in February 2004, and their son Kevin a Senior Army ROTC cadet who died by suicide in June 2003 while studying to be an Army Doctor at the University of Kentucky, the Grahams established the Jeffrey C. and Kevin A. Graham Memorial Fund to provide the “Question, Persuade, Refer” suicide prevention program at the University of Kentucky. The Grahams were instrumental in establishing the Jeffrey and Kevin Graham Memorial Endowed Lectureship in Psychology for the study of depression and suicide prevention at Cameron University, in Lawton, Oklahoma. Additionally, they support the ongoing efforts of the Pikes Peak Suicide Prevention Partnership, Colorado Springs, Colorado (El Paso County), through the “Jeffrey and Kevin Graham Support Services”. The Graham’s story is featured in the award-winning book, “The Invisible Front: Loss and Love in an Era of Endless War”, by Yochi Dreazen.